The expression ‘office politics’ has got a bad name. We think of them as something undesirable, unwholesome, toxic. In my book they are far from bad, just an inevitable part of professional life. They must be embraced with as much humour, self-conscious deliberation and wisdom as possible.

On a daily basis, it’s absolutely inevitable that people will find themselves competing. Interests at work frequently do not coincide. Resources are finite, like the most stimulating tasks, the best shift hours or pots for bonusses. It is healthy for us to use our wiles to try and get the best of these for ourselves. At its simplest, that’s all I mean by ‘office politics’: the normal wheezes everyone uses to advance their interests.

Astuteness:  Being able to read others, yourself and your organization.

Effectiveness: Knowing which combination of tactics to use, who to direct them at, choosing the right moment and performing the words and deeds effectively, always with some measure of actual thespianism – deliberate pretences and acting.

Networking: Carefully nurtured relationships, within and beyond your organization, enable you to press the right buttons. They build your reputation, oil wheels and are vital for moving between jobs.

The Appearance of Sincerity: Quite often, the inner and the outer must necessarily be different in order for you to achieve successful management of the impression you are creating. You need to be able to do this in ways which seem sincere. If your colleagues have lost faith in your honesty and integrity, it will be hard to progress.

Defined as these four skills, my suggestion to you is that there is nothing wrong with office political activity. In fact, my ambition is to help you to become much more self-aware about your use of them.

That does not mean I am advocating cold, selfish ruthlessness, far from it. I am not in favour of dog-eat-dog, self-preening career bestiality. There is fascinating new evidence regarding the kind of people who are like that. It has proven they are the sort most likely to be making your life hell at work. There are three kinds which overlap:

Psychopaths: Highly impulsive thrill-seekers who lack empathy for others. Think Stalin and Gordon Gekko (from the film Wall Street). They are four times commoner among senior executives.

Machiavels: Exceptionally calculating, they behave in a cold and manipulative fashion, ruthlessly pursuing their self-interest. Think Henry Kissinger and Peter Mandelson. People at or near the top have this trait much more than those lower down the food chain.

Narcissists: Commonly perceived as vain, they are prone to grandiosity, a sense of entitlement, a desire for dominance and feelings of superiority. Think Madonna and Maradonna. Senior managers are more likely to be like this than ordinary people and, believe it or not, than mental hospital patients.

What the new evidence shows is that people who have one of these tendencies, also are liable to possess the others. This Dark Triad of characteristics is very likely to be present in that person in your office who causes so much trouble. What is more, there are more such people about compared with thirty years ago.

I want to help you develop the skills to cope in such a world and explain the reasons for the shocking behaviour of your triadic colleagues. That knowledge is the spade for digging an oasis of sanity for yourself in your career.

By creating a persona for coping with your work relationships, you can get as close a fit as possible between who you really are and the face you present to your colleagues. You can become savvy without becoming toxic to yourself and others. By becoming deliberate and poised in your performance, you can be more, rather than less, real. You are also more likely to end up in fulfilling occupations and in roles within them, and to contribute benignly to your family and society. Indeed, office political skill is an important component of true emotional health 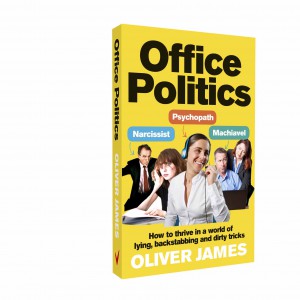 Office Politics is Out Now – Find out more here